We're still househunting. We thought we'd found one, but the estate agent said no; when we asked questions, they said that one of us needed to be in full-time employment. Of course as a contractor, I'm not in full-time employment, but Kit is-- even though she's been signed off work sick for nearly two years now. Apparently, if they meet an able-bodied man and a woman in a wheelchair, people assume the woman in a wheelchair can't be the breadwinner. I should probably have guessed. Anyway, we've sorted it now, so we're going to look at more houses this afternoon-- with a different estate agent.

Last night we drove all the way from Surrey to Manchester, where Yantantessera the cat was waiting for us: she's being looked after by Kit's folks. 'Tessera was very pleased to see us, even though it was well after midnight, but while I was unpacking the car she decided to take the opportunity to slip out of the front door and explore. I couldn't find her in the dark, and in the end I gave up and went to bed. At about half past two I was woken by 'Tessera standing outside and mewing that she was ready to come back in now. This may explain why today's Gentle Readers is late.

It was a joy yesterday to discover that Kathryn Rose, who set my poem I walked in darkness to four-part harmony earlier this year, has made it into a video so that you can enjoy it whether or not you read music. Do go and listen: it's very beautiful.

I tried to say: you make my life complete,
you put my puzzle pieces into place.
But then I tried to send it as a tweet.

It didn't fit. I thought I could delete
one part, about the joys of your embrace;
I tried to say: you make my life complete,

but still it was too long. I thought I'd cheat
ByMergingWordsAndUsingCamelCase.
But then I tried to send it as a tweet.

It failed again. I must admit defeat.
Like Fermat's margin, Twitter lacks the space
to let me say you make my life complete.

It makes the longer forms seem obsolete.
But even Petrarch's work would meet disgrace
if cut and scaled to send it as a tweet!

And somehow public posts seem indiscreet.
I think I'd rather whisper to your face
the message that you make my life complete,
and far too full to post it as a tweet.

A few months ago, because a film called Divergent had just come out, I kept seeing the word "divergent" written down. So I pretty much had to draw a diver gent.

A few months ago, because a film called Divergent had just come out, I kept seeing the word "divergent" written down. So I pretty much had to draw a diver gent. 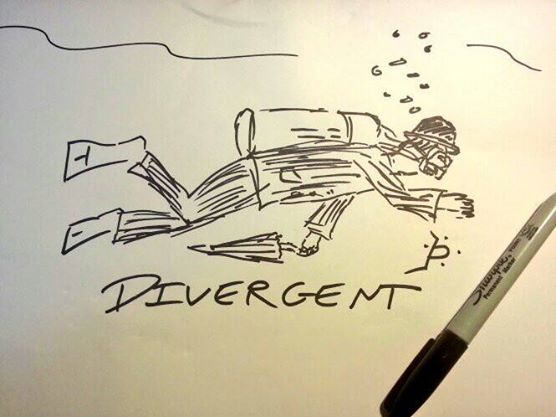 Before the English arrived in Great Britain, a Celtic language akin to modern Welsh and Cornish was spoken throughout the island south of the Forth. When the English arrived, the culture and language was pushed to the far edges (they "drove the Britons westward into Wales and compelled them to become Welsh", as Sellar and Yeatman so memorably put it), though recent genetic studies indicate that it was more that the culture moved than the people.

And Wales and Cornwall are still with us. But for a few centuries more there was a Celtic holdout north of the Humber, sandwiched between the Angles below and the Picts and Scots above. The old Welsh poems and songs call it the Hen Ogledd, the Old North. It faded away in the end, but one of its particularly interesting relics are the names of numbers used to count sheep:

The names of the numbers are startlingly similar to modern Welsh.

I first encountered this counting system, long before I was aware of its interesting philology, in a book called The Tovers by Elisabeth Beresford. And this is, as you may have guessed, partly where the name of Yantantessera the cat comes from. After all, there's safety in numbers.

I was delighted to receive an email from gentle reader Mongoose, following on from You are old, Father William last time, about a conversation she had had with her cat Heidi. I reproduce it below with permission.