to cut a cabbage leaf

I've been looking into PhD possibilities. But more of that later.

And we visited the John Rylands Library for the first time, a beautiful place in Victorian Gothic made as a memorial to a local industrialist. (The law students among you may know him as a party to Rylands v Fletcher.) It has an impressive collection of books and manuscripts, including the oldest known fragment of the New Testament, part of John's gospel copied only a few decades after the book was written.

As if that weren't enough, the building is quite breathtakingly beautiful. Here's part of the reading room: 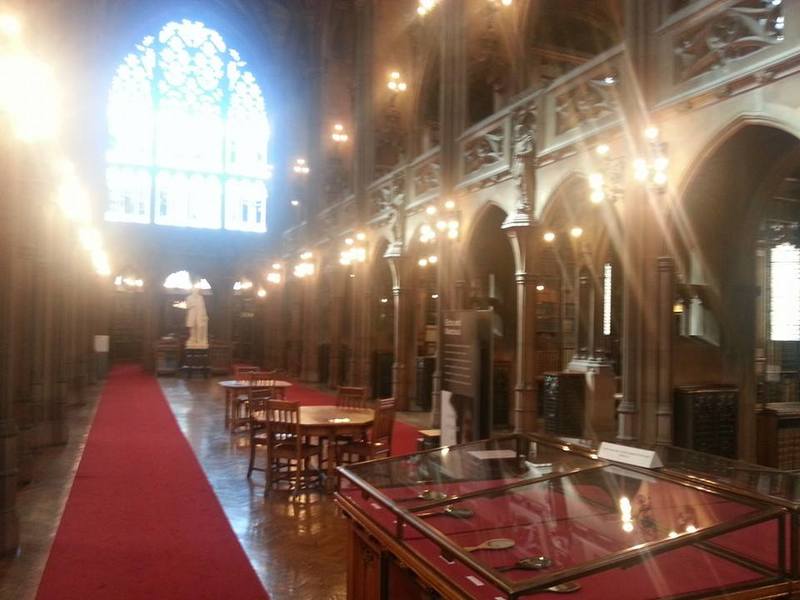 The library also contains a dragon named Grumbold. Regular readers who remember Not Ordinarily Borrowable, a story of mine largely about dragons and libraries, may judge of my surprise to discover it coming true.

When Merlin looked upon this land,
he knew by magic arts
the anger in the acts of men,
the hatred in their hearts:
he saw despair and deadly things,
and knew our hope must be
the magic when the kettle sings
to make a pot of tea.

When Galahad applied to sit
in splendour at the Table,
he swore an oath to fight for good
as far as he was able.
But Arthur put the kettle on,
and bade him sit and see
the goodness that is brought anon
by making pots of tea.

When Arthur someday shall return
in glory, with his knights,
he'll rout our foes and bless the poor
and put the land to rights.
And shall we drink his health in ale?
Not so! It seems to me
he'll meet us in the final tale
and share a pot of tea. 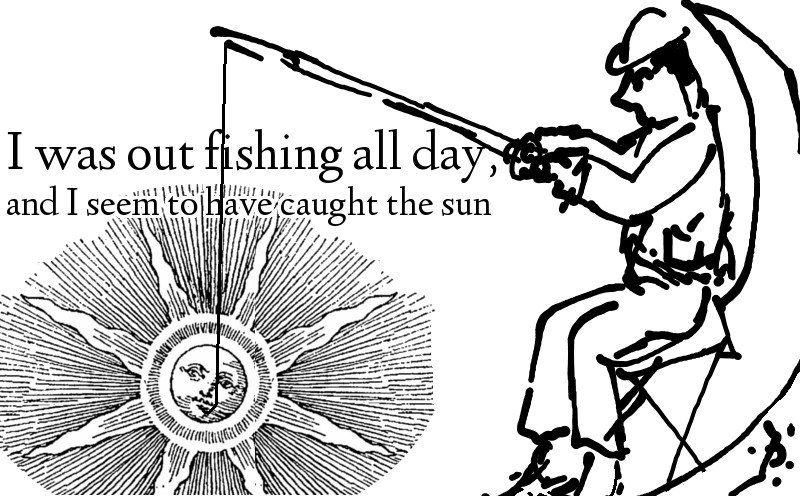 Suppose I asked you to name the world's great heroes? (For example, as you may recall, some talk of Alexander.) Well, in the Middle Ages, a fair amount of thought went into the list. Who was an example of virtue and valour; whose chivalry was worth emulating?

One such list is known in English as the Nine Worthies. It was drawn up in the early 1300s, and remained a popular theme in art for centuries after. Here they are in 1460, looking for all the world like a medieval pack of Top Trumps: 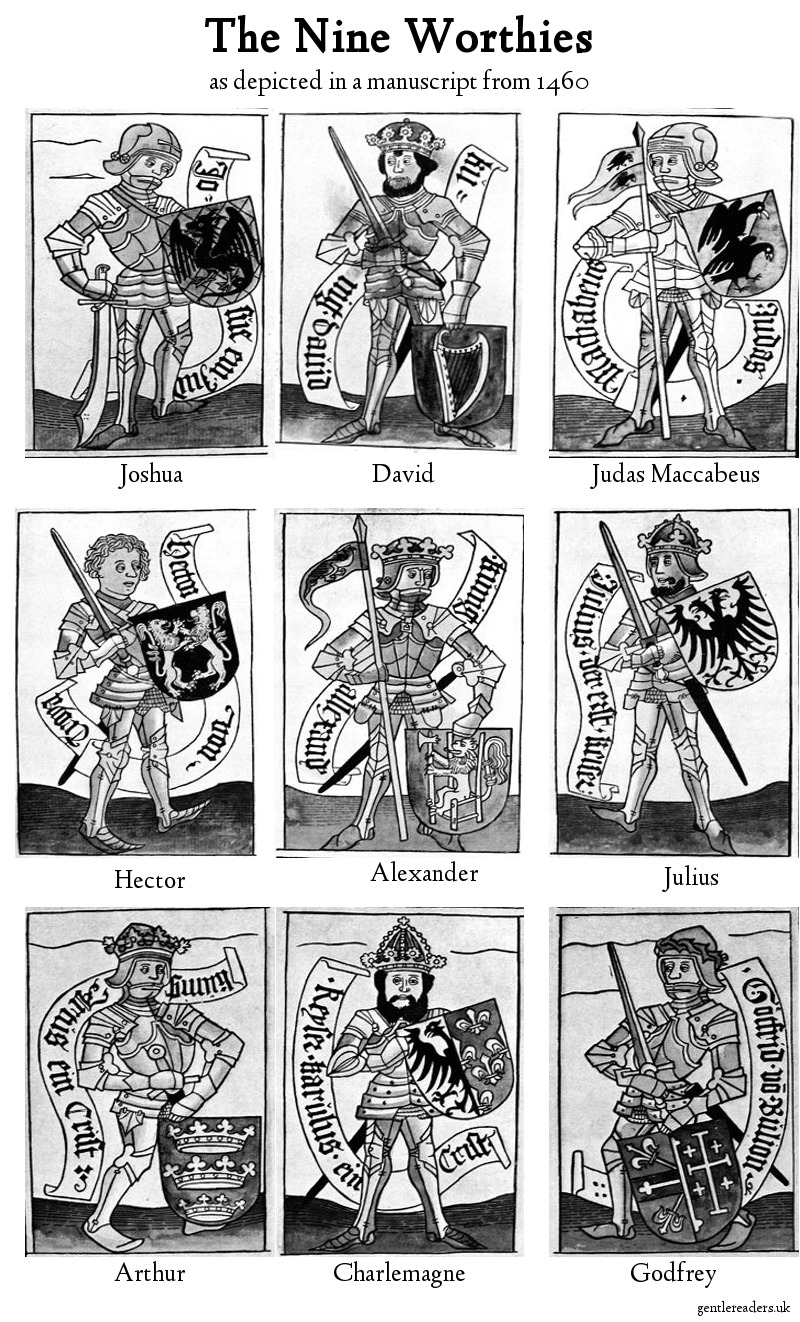 Even though some of these men had lived (or were supposed to have lived) millennia earlier, they are all drawn wearing armour of the time, and bearing their own coat of arms, as if they lived in that very moment. This is because they are deliberately idealised— after all, as a careful perusal of the Old Testament will show, not all of them were in fact models of chivalry. Take King David, for example... 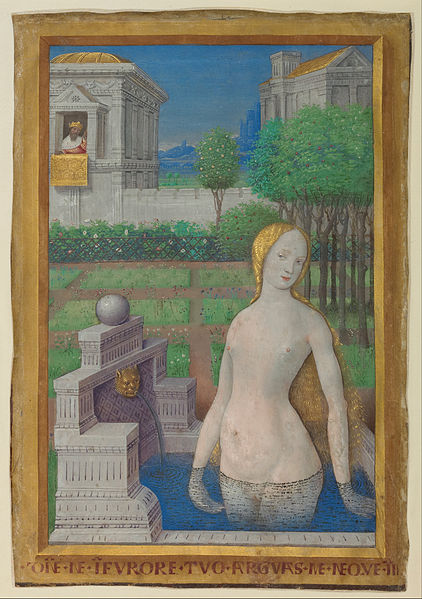 The Worthies are divided into three groups of three: three Jewish heroes, three Christian heroes, and three pagan heroes— that is, pagan in the old sense of not following an Abrahamic religion.

The Jewish heroes are:

The pagan heroes are:

The Christian heroes are:

I am particularly interested by the heraldry. How did they make up new and unique coats of arms for people who had been dead for three thousand years? David has a harp because he composed psalms (and not because he was king of Ireland). Julius has an eagle rather like the one on the Roman standard; Charles has the same, appropriately for someone who was also trying to become Emperor of Rome, but combined with the lily pattern known as "France Ancient". Others of them are baffling to me: what is Joshua bearing, for example? I did find a reference to the arms they made up for Alexander in a book, but frustratingly I ran out of time to research this.

I am glad to report that there were also nine female Worthies to balance out the nine men. Unfortunately none of the writers seem to agree about which nine women they were.

When a certain Charles Macklin claimed he could repeat any sentence he heard, no matter how complex, Samuel Foote allegedly composed this sentence impromptu:

So she went into the garden
to cut a cabbage-leaf
to make an apple-pie;
and at the same time
a great she-bear, coming down the street,
pops its head into the shop.
What! no soap?
So he died,
and she very imprudently married the Barber:
and there were present
the Picninnies,
and the Joblillies,
and the Garyulies,
and the great Panjandrum himself,
with the little round button at top;
and they all fell to playing the game of catch-as-catch-can,
till the gunpowder ran out at the heels of their boots