the sun come up from the south

Mostly preparing for Christmas— thank you to all of you who sent cards!— and rewriting the Gentle Readers website, though it's not yet ready to go live. And Kit has put together an entry in the Inclusive Advent calendar about welcoming people who are chronically ill.

Also, because it's the time of year to reread The Dark is Rising , and I've been thinking about the new volume of Gentle Readers beginning in January— I'm planning to put a review in each issue of a book I've loved, past or present, mostly but not exclusively children's and YA books. If you have suggestions for books you'd like reviewed, do let me know.

Perhaps I might compare... oh damn it. No.
It's four, and it's already almost night.
The land lies suffocated under snow:
they say "the dead of winter", and they're right.
My life's on hold until the first of May:
until that morning comes I have to cope
with dragging on through every darkened day.
July will come: I have to live in hope.

No. You're the one I'm missing, not July.
Yours is the warmth, not April's, that I miss.
I miss your smiles far more than May, and I
lie longing, not for June, but for your kiss;
I'm cold and tired. I don't know what to do.
Shall I compare a summer's day to you? 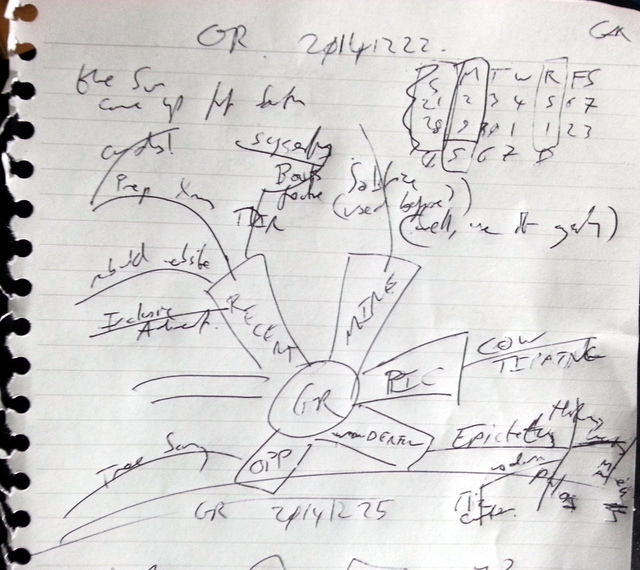 In Asia Minor, sometime around the year 55 of our era, a baby was born; he was soon afterwards sold into slavery, taken to Rome, and given the name Epictetus (Ἐπίκτητος). He couldn't walk, so his master sent him to learn to read and write instead; he thrived in academia and ended up as one of the foremost philosophers of his age. Eventually his master freed him, and Epictetus set up his own philosophy school.

Epictetus was a Stoic: that is, he believed the important thing in life is to learn to act and react appropriately. You can't expect to be fully in control of your possessions or your body, and you certainly can't expect to control other people, but you can learn to be more in control of your own mind and your own reactions. For example, suppose you're a tennis player; however hard you train, you might never win at Wimbledon, because of things you can't control: luck, the weather, the performances of other players. But being the best tennis player you can be is within your control, so it's a more appropriate goal to aim for. If you do manage to learn to react to everything that happens in the most appropriate manner for that thing, Epictetus says you will have achieved happiness (εὐδαιμονία, eudaemonia, "good-spiritedness").

We don't have any of Epictetus's own writings. But Arrian, one of his pupils, wrote up his lecture notes in eight books called the "Discourses", four of which have come down to us; he also produced a short summary often called the "Enchiridion", which simply means "handbook". That's a good place to start reading. There are several good translations; the one at the link was written by the rather wonderful Elizabeth Carter (1717-1806).

Many people have learned from Epictetus's ideas in the last two thousand years, but perhaps one of the most surprising is the second-century Roman emperor Marcus Aurelius, himself no mean philosopher; though they never met, the emperor cited Epictetus's influence repeatedly in his writings. In around a hundred years, Epictetus had gone from slavery to being the teacher of the emperor of Rome.

This is a good song for the winter solstice. "Ellum" is an obsolete dialectal form of "elm"; its habit of dropping branches on people is noted also in White's The Sword in the Stone , where the tree adds, "The cream of the joke is that they make the coffins out of me afterwards." Unfortunately for the landscape, but perhaps fortunately for our skulls, the elm has become nearly extinct in England since Kipling's time.

This is a good song for the winter solstice. "Ellum" is an obsolete dialectal form of "elm"; its habit of dropping branches on people is noted also in White's The Sword in the Stone, where the tree adds, "The cream of the joke is that they make the coffins out of me afterwards." Unfortunately for the landscape, but perhaps fortunately for our skulls, the elm has become nearly extinct in England since Kipling's time.

A TREE SONG by Rudyard Kipling

Oak of the Clay lived many a day
Or ever Aeneas began.
Ash of the Loam was a lady at home
When Brut was an outlaw man.
Thorn of the Down saw New Troy Town
(From which was London born);
Witness hereby the ancientry
Of Oak, and Ash, and Thorn!

Yew that is old in churchyard-mould,
He breedeth a mighty bow.
Alder for shoes do wise men choose,
And Beech for cups also.
But when ye have killed, and your bowl is spilled,
And your shoes are clean outworn,
Back ye must speed for all that ye need,
To Oak, and Ash, and Thorn!

Ellum she hateth mankind, and waiteth
Till every gust be laid,
To drop a limb on the head of him
That anyway trusts her shade:
But whether a lad be sober or sad
Or mellow with ale from the horn,
He will take no wrong when he lieth along
'Neath Oak, and Ash, and Thorn!

Oh, do not tell the Priest our plight,
Or he would call it a sin;
But— we have been out in the woods all night,
A-conjuring Summer in!
And we bring you news by word of mouth—
Good news for cattle and corn—
Now is the Sun come up from the South,
With Oak, and Ash, and Thorn!