I am going to be a horse

Sorry about the hiatus. I was ill for a while, and then when I had to catch up on all the stuff that piles up until you're better. But I'm here now, feeling a lot less awful, and more alive than I've felt in years.

The men in their mansions drink their delight.
For those in the streets it is always night.

Those in the doorways step out to fight.
They slip to where it is always night.

Each plays a game to increase his might.
Each keeps his brother where it is always night.

We laugh, and lie about the lands of light.
I still light candles where it is always night. 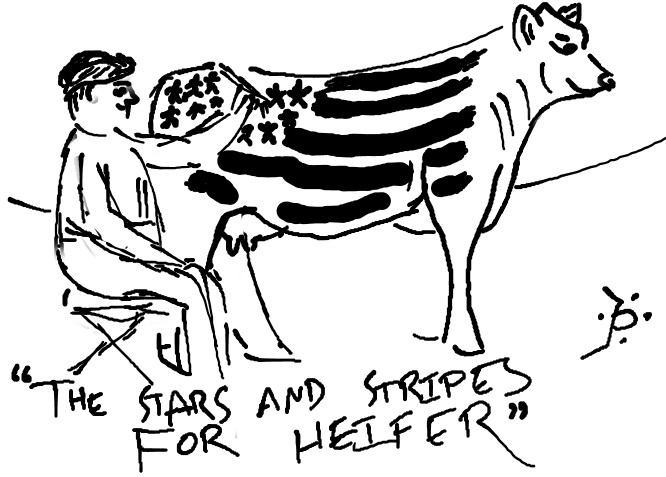 The stars and stripes for heifer

When I was about six years old, I decided to make a poetry anthology in an old school exercise book. For the next two or three years, whenever I found a poem I liked, I added it to the book. There are even a few compositions of my own in there.

One of the poems is the lyrics of Lily the Pink, a song about the redoubtable Lydia Pinkham that we'd learned at school. In reality, the chorus of this song begins:

But at infant school they didn't give you a sheet with the words, because they assumed you couldn't read, so I had to work out the lyrics from listening to the other children and the teacher. Unsurprisingly, then, the version of the song in my anthology goes:

Drink a drink a drink
Lily the Pink a pink a pink
To save your eye
The human ray hay hace.

Errors like this are known as mondegreens, after a 1957 article by Sylvia Wright in Harper's. Ms Wright notes that when she first heard the ballad The Bonnie Earl o'Murray (Childs 181), whose first verse runs

Ye Highlands and ye Lowlands,
Oh, where have you been?
They have slain the Earl o' Murray
And laid him on the green.

she misheard the last two lines as:

They have slain the Earl of Murray,
And Lady Mondegreen.

Mondegreens are a sort of copyist's error in the passing on of culture, and they crop up everywhere.

There are dozens involving Christmas carols. Have a look for collections around the web and send me your favourites, or some of your own.

This is the start of the poem; it goes on to give similar cases of apes who want to be humans, and cavemen who want to start civilisation. But I think the point is well made with the excerpt below.

There was once a little animal,
No bigger than a fox,
And on five toes he scampered
Over Tertiary rocks.
They called him Eohippus,
And they called him very small,
And they thought him of no value,
When they thought of him at all;
For the lumpish old Dinoceras
And Coryphodon so slow
Were the heavy aristocracy
In days of long ago.

Said they: “You always were as small
And mean as now we see,
And that’s conclusive evidence
That you’re always going to be.”
“What! be a great, tall, handsome beast,
With hoofs to gallop on?
Why! you’d have to change your nature!”
Said the Loxolophodon.
They considered him disposed of,
And retired with gait serene;
That was the way they argued
In the early Eocene.