Working on getting better. They've put me on a new medication, lamotrigine, and they're ramping me up slowly at 25mg a fortnight. It's not at the full dose yet, but I think it's helping already.

The other day I went to visit some friends, and they had a harp! So of course I asked to play it. Even though I'd never played before, after about two hours it was sounding rather tuneful. I think I'll save up for one and learn to play it properly. 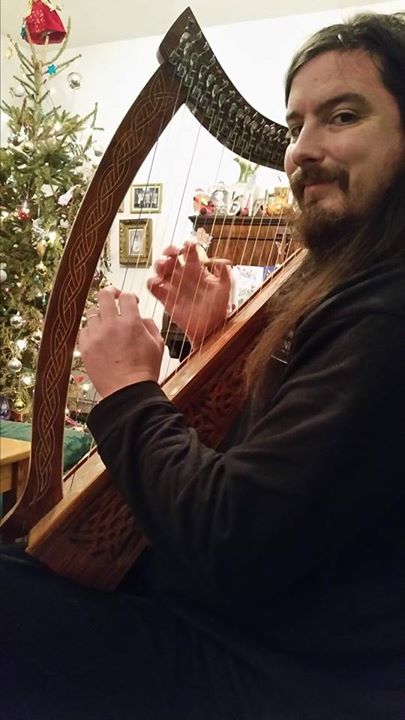 Photo thanks to Kit.

Here's a poem about ringing in the new year. It's the earliest sonnet of mine I think is any good: I wrote it when I was about 18.

Look to your Lord who gives you life.
This year must end as all the years.
You live here in the vale of tears.
This year brought toil, the next year strife.
For too, too soon we break our stay.
The end of things may be a birth.
The clouds will fade and take the earth.
Make fast your joy on New Year's Day.
When dies a friend we weep and mourn.
When babes are born we drink with cheer.
But no man mourns when dies the year.
When dies the age, may you be born.
Your death, your birth, are close at hand.
In him we trust. In him we stand.

A group called Africa2Moon announced today that it's organising an Africa-wide effort to go to the moon. Many people have objected that Africa has many problems which need work and money, and that a moon shot will only distract from more urgent priorities. The organisation's answer was rather interesting: in a way, the moon landing itself is a sort of McGuffin. The real story is about getting there: as a side effect of training up the scientists and the engineers, and building the systems needed, it should reduce the brain drain to the west, and improve life across the continent as a side-effect-- not unlike the effects of the US space programme a generation earlier.

And this set me thinking about parallels: we all live in communities that need investments of time and effort and money, from food banks to counsellors. When and how is it possible to create something within these communities, something that everyone can collaborate on and be inspired by?

AEDH WISHES FOR THE CLOTHS OF HEAVEN by W B Yeats

Had I the heaven's embroidered cloths,
Enwrought with golden and silver light,
The blue and the dim and the dark cloths
Of night and light and the half-light;
I would spread the cloths under your feet:
But I, being poor, have only my dreams;
I have spread my dreams under your feet;
Tread softly because you tread on my dreams.