I had a lovely evening at Pop Up Poetry in Guildford on Tuesday. The hosts and the regulars are as friendly a bunch of poets as you could hope to meet, and I'm going to miss them when we move up north. I expect I'll be back, though. There weren't as many folk there as usual, because of the football, so nothing's on video. But if you'd like to see part of a set I did at Pop Up a few months ago, click here.

I pitched a book to unbound.co.uk; they're still considering whether to run it. It's like a kind of Kickstarter for books. My pitch went like this:

" Over the holidays, Erica hides away in the university library. She's surprised to find a book about her mothers and how they met, especially since the story seems to be from an alternate history and involves a dragon. Further investigation turns up confirmation that it's true, but why have they never mentioned this, and why are there no dragons now? Asking questions brings unwelcome answers in the form of Yvette of the Order of Merlin, who is searching for parts of the tea-set used on the Round Table: they think Erica might just be the one who can find the missing cup for them. It turns out that Yvette had originally introduced her mothers to one another, when they were on two separate quests (one for library books stolen by a dragon, one for magic cake): Erica begins to suspect a deeper motive. Who was Erica's biological father, and does it matter? What have the Order been hoping to gain from Erica since before she was born? And can you really restore happiness in the land with a tea-set?"

I'm planning to make a podcast and a video version of Gentle Readers, though the email newsletter will still be its primary form. I'm also planning to make a print-on-demand volume of every three months' content. And the website needs sprucing up a lot.

If you have a friend who would enjoy Gentle Readers, please do share this or any other edition with them-- or ask them to join the list themselves! The more the merrier, in many ways.

I had to draw this because it's what I think of every time I see the instruction " Microwave on high for two minutes".

I had to draw this because it's what I think of every time I see the instruction "Microwave on high for two minutes". 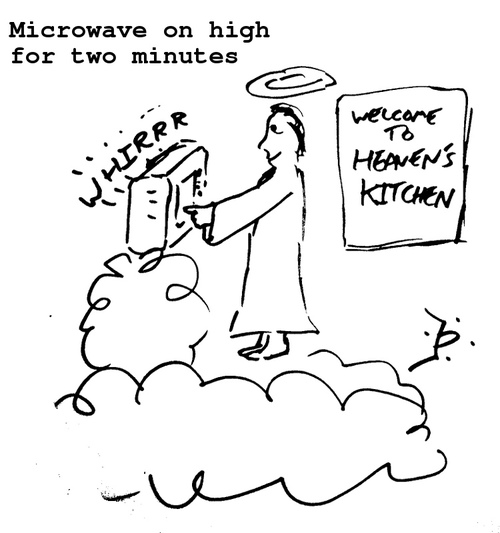 During the Great Depression, US President Franklin D. Roosevelt ordered the construction of the Hoover Dam, then the biggest dam in the world, at a cost of about fifty million dollars— over 800 million in today's money. It might seem odd at first sight to pour money into public works during a recession, but the dam provided more than hydroelectricity and water— it provided inspiration, and for thousands of workers it provided a regular paycheque. Tens of thousands more were kept in work at businesses where the pay was spent.

The original design for the dam was planned by the engineers, and was severely functional. For balance, the consortium engaged an architect, Gordon Kaufmann, and an artist, Allen True. Together they made the dam not just a useful artefact, not just an inspiration, but also a thing of beauty in the (then current) Art Deco style. True carried out anthropological research and based his work on ideas and patterns from nearby Native American nations. He included a floor with a star map accurate for the night of the dam's dedication ceremony, so that if one day a civilisation finds the dam but can't read our writing, their astronomers can still work out when it was built. 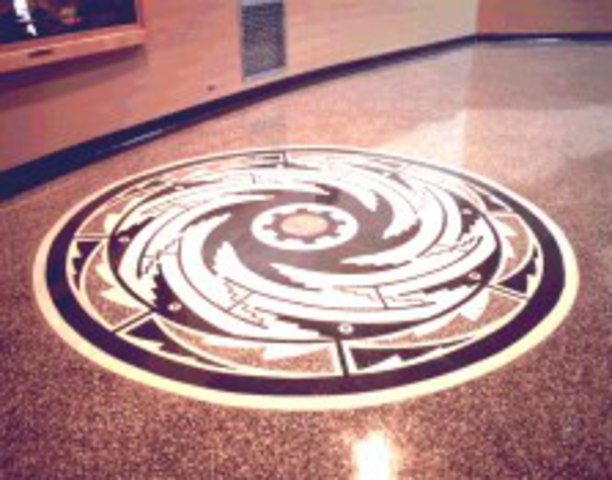 This poem from 1641 by Catherine Dyer is part of her husband's epitaph, and it is the only verse of hers which survives. She must have written more poetry than this, mustn't she? Maybe we'll find her other work hidden in a dusty library one day, and it will change the hearts and minds of the world. Who knows?

This poem from 1641 by Catherine Dyer is part of her husband's epitaph, and it is the only verse of hers which survives. She must have written more poetry than this, mustn't she? Maybe we'll find her other work hidden in a dusty library one day, and it will change the hearts and minds of the world. Who knows?

My dearest dust, could not thy hasty day
afford thy drowsy patience leave to stay
one hour longer: so that we might either
sat up, or gone to bed together?
But since thy finished labour hath possessed
thy weary limbs with early rest,
enjoy it sweetly: and thy widow bride
shall soon repose her by thy slumb'ring side.
Whose business, now, is only to prepare
my nightly dress, and call to prayer:
mine eyes wax heavy and the day grows old.
The dew falls thick. My blood grows cold.
Draw, draw the closéd curtains, and make room:
My dear, my dearest dust: I come. I come.